Introducing a vast collection of home interior and exterior products that express home design in every way imaginable.

When Michael McKinley’s 25-year-old home was destroyed by fire from an ember landing on its cedar roof, the architect turned tragedy into opportunity. He set out to redesign his new modern farmhouse utilizing state-of-the-art materials, including fire-resistant products like Boral TruExterior Siding & Trim and Boral composite roofing, and incorporating the knowledge he had gained over three decades as a designer.

“We’re 25 years into the future and, no matter how well you did it then, it’s not the same. All the factors change,” notes McKinley, principal of Michael McKinley & Associates in Stonington, Conn.

At 3,100 square feet, the new four-bedroom/three-bath house is about a quarter smaller—a size much more in tune with the empty-nest lifestyle McKinley and his wife, Kathy Calnen, now enjoy—yet lives larger.

“I’ve fine-tuned my skills in terms of design, becoming a lot more creative with smaller spaces, and thus more efficient,” the architect says. “That’s a key part of the home’s sustainability story.”

Having lived on the property for 25 years, the couple understood the character and movement of the sun and tailored the design accordingly. “The new house is a complete expression of the behaviors of the sun,” McKinley says. “The path of the sun leads you from the kitchen, around the living room, pivoting over the double-sided fireplace, and to the south/southwest-facing conservatory where we’re going to grow trees. This is both a spiritual experience and an energy saver in terms of heat and light.” 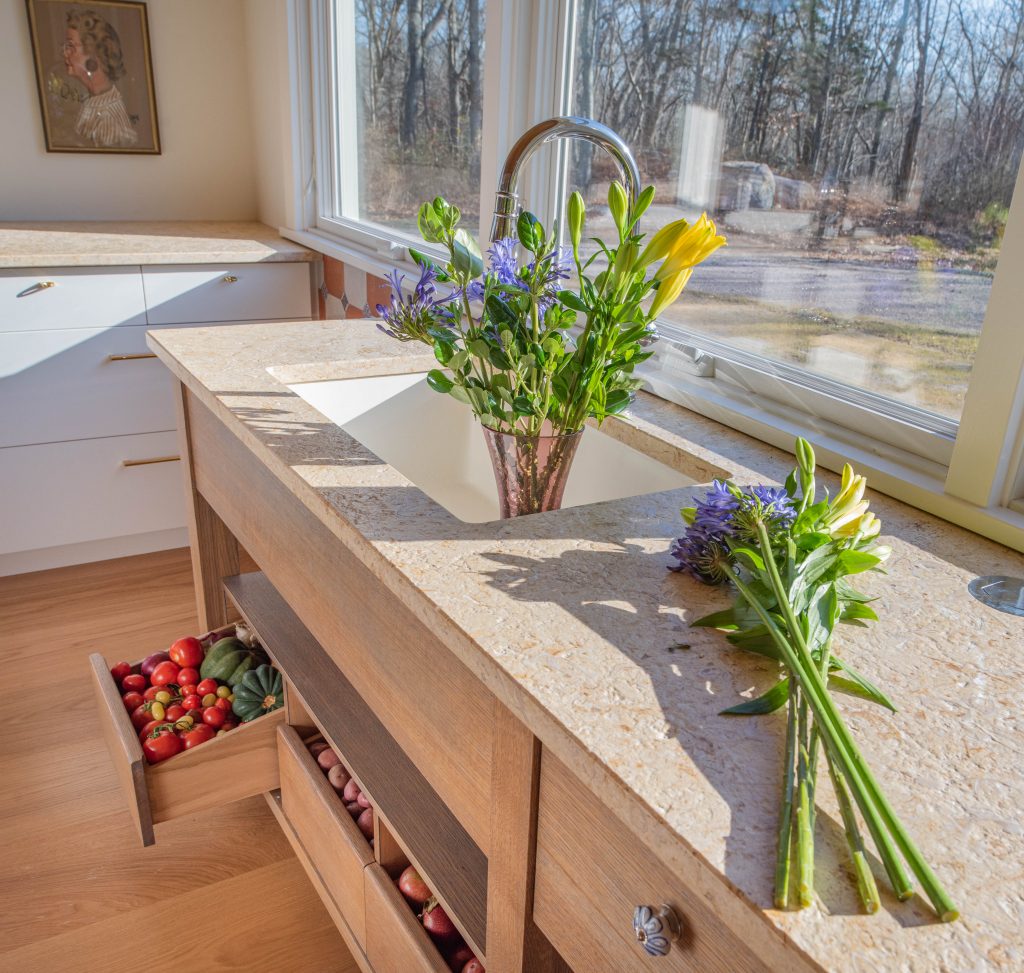 Along those lines, McKinley and Calnen were intentional in the selection of energy-efficient, sustainable products, including a geothermal system, a solar array, and radiant floor heat. An elaborate drainage system collects rainwater from the roof; water is stored in an underground cistern for use in the garden where Calnen grows enough vegetables to feed the couple as well as to help stock the local food bank. A farm table in the kitchen, positioned near the door to the gardens, has its own sink and bins for ease of use.

Rather than the coastal shingle style of the previous home, McKinley opted for a modern interpretation of the traditional farmhouse, a nod to the surrounding landscape dotted with farmsteads and historic remnants of orchards.

McKinley’s blending of historic and modern includes a roofscape featuring multiple gables and pitches; the windows are configured traditionally, but with large, operable units that give a subtle nod to the expanses of glass typical of modern homes. 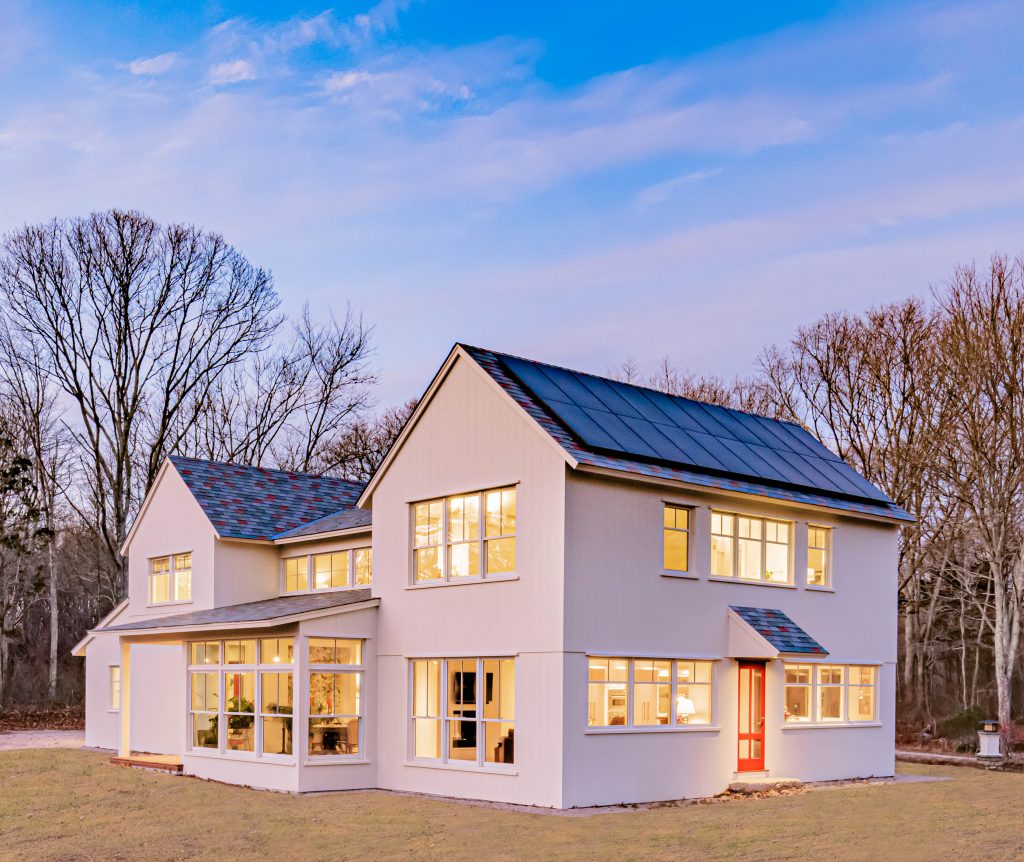 McKinley took a similar approach to the cladding, selecting Boral TruExterior Siding in a Nickel Gap profile—but oriented vertically and precisely installed symmetrically across the façades. To eliminate horizontal joints, installers incorporated an overlap, a more traditional feature that transforms into an elegant, solid look, almost like concrete, as you move closer. As the siding reaches higher on the wall, it merges with the horizontal plane of the overhangs, also made with TruExterior. “It’s quite the geometry study,” says McKinley, noting that the overhangs are exaggerated in some areas and kept to a minimum in others.

The decision to use TruExterior siding and trim and Boral roofing was about much more than the aesthetics, however. It was an intentional choice made in part to ensure the home was more fire resistant than the previous dwelling.

Made with poly-ash, a proprietary blend of fly ash and polymers, TruExterior Siding & Trim are certified by the California Building Commission for inclusion on the Wildland-Urban Interface Zone (WUI) Fire Area Products Listing. The product line is part of a relatively small group of cladding materials approved for WUI-designated buildings. TruExterior also resists insects, which will help the homeowners avoid the boring bees they encountered in the wood siding of their previous home. 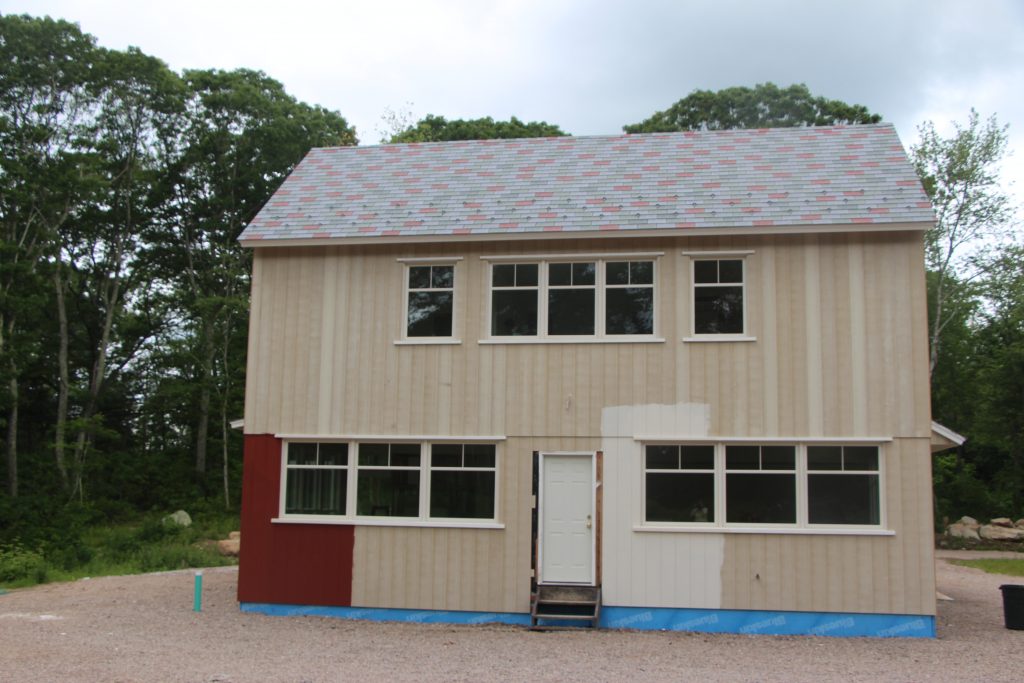 Calnen tested two colors on the walls—a barn red and a warm white—and ultimately selected warm white, a further nod to the modern farmhouse style. It’s one more touch on a home that combines comfort with performance, authentic design with durability.